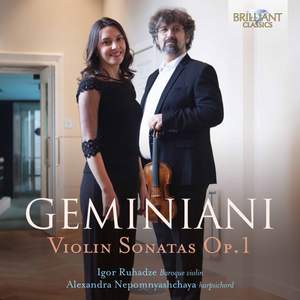 The start of an exciting new series: the recording of the complete works by Francesco Geminiani!

Francesco Saverio Geminiani (1687-1762) was born in Lucca. He began his study at an early age with his father, but his most important lessons followed in his years with the great Roman Master, Arcangelo Corelli. Composition lessons with Alessandro Scarlatti helped inspire and solidify his craft. In 1714 Geminiani settled in London, where he quickly gained fame as an ensemble player, concert violinist, and teacher. Here he became friends with Handel and led the orchestra during many performances together. Geminiani enjoyed great success not only in London, but also in Ireland where he spent a considerable amount of time. In 1760 he settled in Dublin, dying there in somewhat impoverished circumstances in 1762.

In 1716 the 12 sonatas for Violin and Continuo Op.1 were published in London as ‘Sonate a violino, violone e cembalo’. They strongly reflect the influence of Corelli's violin sonatas. They are highly demanding works, showing a wide array of expression, ranging from sadness and introspection to buoyant brilliance and bravado.

Dutch (Soviet Union born) violinist Igor Ruhadze was trained in his Moscow as a virtuoso on the modern violin. However, his interest took him into early music, playing with such ensembles as Musica ad Rhenum, Jed Wentz and others. His solid technique enables him to tackle the often fearful difficulties of Geminiani’s music with ease, charm and brilliance. For Brilliant Classics he recorded the complete works by Locatelli, violin sonatas by Biber, violin concertos by Leclair and others.

Russian-born pianist and harpsichordist Alexandra Nepomnyashchaya graduated from the Department of Historical and Modern Art Performance at the Moscow State Tchaikovsky Conservatory from the class of Professor Olga Martynova in 2009, where she studied piano, harpsichord and fortepiano. She continued her studies at the Conservatorium van Amsterdam, gaining a master’s degree under the tutelage of Richard Egarr and Menno van Delft. In 2015 Alexandra graduated at the Hochschule für Musik und Theater in München under Prof. Christine Schornsheim. Alexandra has won top prizes at competitions including the International Festival of Early Music in Austria, the All-Russian Harpsichord Competition in St. Petersburg, the Prague Spring International Competition and the International Johann Sebastian Bach Competition Leipzig in 2014.