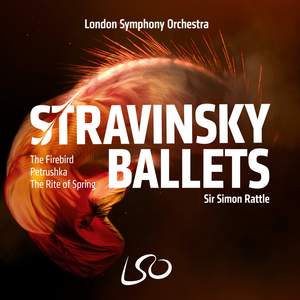 there are wonders to behold here and you can sense and feel the magic descending in the stealthy opening measures of The Firebird. — Gramophone Magazine, May 2022

I. The Shrovetide Fair (Introduction)

I. The Moor's Cell

II. Dance of the Ballerina

III. Waltz (The Ballerina and the Moor)

I. The Shrovetide Fair (towards evening)

II. Dance of the Wet-Nurses

III. A Peasant Enters with a Bear

V. Dance of the Coachmen and Grooms

Adoration of the Earth. Introduction

The Augurs of Spring - Dances of the Young Girls

Ritual of the Rival Tribes

Procession of the Sage - The Sage

Dance of the Earth

Mystic Circles of the Young Girls

Glorification of the Chosen One

Evocation of the Ancestors

Ritual Action of the Ancestors

Sacrificial Dance (The Chosen One)

Stravinsky sent shockwaves through classical music in the 20th Century. His first three ballets - The Firebird, Petrushka and The Rite of Spring, all composed between 1909 and 1913 - brought a new and frenzied sense of rhythm, so distressing to audiences that it caused uproar; The Rite of Spring even caused a riot.

And it’s not hard to see why. Is there any moment in music more demonic than the opening to The Firebird, a terrifying rumble of strings that would make Jaws tremble? There are few pieces more unsettling than The Rite of Spring with its carnal, tribal rhythms; or Petrushka with its impish Punch and Judy puppets.

A notable voice of authority on the works of Stravinsky, Sir Simon Rattle masterfully brings these three creations to life in this dramatic performance, recorded live in the Barbican Hall as part of his inaugural season as LSO’s Music Director.

“The juxtaposition of the three ballets also made sense as an incredibly vivid lesson in music history. To progress from the beauties of Firebird to the vividness of Petrushka and the rhythmic savagery of Rite in one evening is to be taken on a unique journey. Only the superlatives, only the full five stars can do justice to an evening which is bound to stay imprinted on the memory. This was a very fine concert indeed.” - Sebastian Scotney (Bachtrack)

there are wonders to behold here and you can sense and feel the magic descending in the stealthy opening measures of The Firebird.