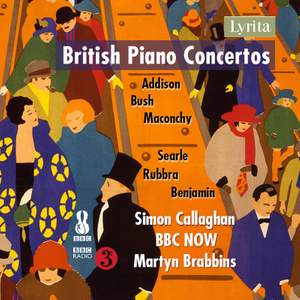 Bush, G: A Little Concerto on themes of Thomas Arne

"Smaller concertos for piano and modest orchestral forces were a feature of British composition in the first half of the 20th century. Often they were written for a special occasion, and typically vanished into oblivion thereafter. During the COVID period we were looking for things to record with small numbers of players, and stumbled across this treasury: short concertos written for entertainment that don’t outstay their welcome. The works on this CD travel from the innocent pastiche of Geoffrey Bush’s tribute to Arne, Edmund Rubbra’s student essay, through the ‘Blues’ of Arthur Benjamin, the serial language of Humphrey Searle, the drama of Elizabeth Maconchy, and the bold humour of film composer John Addison. It is all great fun, and has never been recorded - apart from the Benjamin recorded just once, back in 1959. Simon Callaghan and Martyn Brabbins team-up to raise a smile, enjoying the lighter side of musical life. 'Clearly a musician of curiosity and discernment, Callaghan’s robust piano-playing is also thoughtful, subtle and refined.' Gramophone"