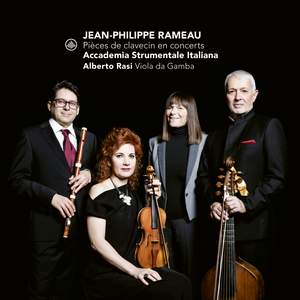 Patrizia Marisaldi has deft control over the often tortuous harpsichord parts, while Luigi Luop’s flute and Rossella Croce’s violin weave in and out of each other in equal partnership. Finally,... — Fanfare, Sep/Oct 2022 More…

Fifteen years after his Nouvelles Suites de Pieces de Clavecin, Rameau once again turns his attention to an instrumental work, for what will be the last time, inspired by the new potential for chamber music glimpsed in the use of the concertante keyboard. The 1741 collection is the only new work he produced between 1740 and 1744, before returning to the musical theatre to which he will dedicate the rest of his life.

The most attractive aspect of the Pieces de Clavecin en Concerts, and the one which provides the most authentic reading of the work, is the multiplicity of possible combinations in performance between the instruments indicated in the score (harpsichord, violin/flute, viola da gamba/2nd violin), following the detailed instructions that Rameau provides for each of them in the various Avis in the preface of the printed edition. The author's intention was undoubtedly for the harpsichord and its virtuosic protagonism to be the backbone of the Pieces; however, the possibilities of alternative timbric arrangements are specifically contemplated by Rameau for this work. What was a widespread ad libitum performance practice, today becomes an extremely inviting challenge for modern performers in terms of tonal reinvention of the pieces. Thus, with each new reading the music may be reinvented, making in turn every new listening experience a rediscovery and a revelation.

The Accademia Strumentale Italiana was founded in Verona with the specific purpose of recreating the atmospheres of those ancient and illustriuos academies, where the pleasure of meeting one another gave a special fl avour to making music together. Its repertoire encompasses instrumental and vocal music ranging from the Renaissance to the Baroque, performed according to strict philological canons, but without compromising its ability to comunicate with the present: its musicians are convinced that even if the score is ancient, Music is always timeless. The Accademia has performed extensively in Europe and has been invited to several international festivals where it has always met with widespread critical acclaim. The members of the Accademia are all renowned specialists in HIP and work together with some of the most famous European ensembles. Since 1993 the Accademia has recorded mainly for Stradivarius and DIVOX, collecting prizes and awards from the specialized press (Midem Classical Award 2007 with the CD Dolcissimo Sospiro). With the recording of Die Kunst der Fuga started a collaboration with the Dutch label Challenge Records. Alberto Rasi is the group's musical director; the ensemble is currently composed of a consort of viols, who are joined by guest artists invited to partake in larger projects.

Patrizia Marisaldi has deft control over the often tortuous harpsichord parts, while Luigi Luop’s flute and Rossella Croce’s violin weave in and out of each other in equal partnership. Finally, Alberto Rasi’s gamba playing blends well with the other performers.