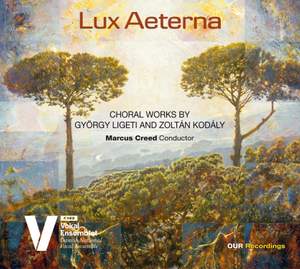 [Lux Aeterna] receives a performance of great virtuosity and breathtaking subtlety from the Danish National Vocal Ensemble under Marcus Creed. For anyone unfamiliar with this repertoire, the... — BBC Music Magazine, May 2022, 5 out of 5 stars (Performance) / 4 out of 5 stars (Recording) More…

"For most of the 20th century, the two giants of Hungarian music were Bartok and Kodaly. Following his explosion on the international scene in the mid-60s, Gyorgi Ligeti, a student of Kodaly, was added to that list. Kodaly was one of the most significant early figures in the field of ethnomusicology. He also composed prolifically for choirs. All of the Kodaly works on this program were influence by folk music and chart the composer’s development from the world of late romanticism to the mini-cantata Matrai kepek (Matra pictures), including a shimmering performance of Esti Dal (Evening Song), his most beloved choral work. Most of music that Ligeti composed for a cappella choir was written in the mid- 50s while still in Budapest. Alongside numerous folk song arrangements, like Mátraszentimrei Dalok, were pieces like Éjszaka – Reggel (Night – Morning) which were already pushing the sonic boundaries with clusters and onomatopoeic sounds. Ligeti’s mature style can be heard in the shimmering and justifiably famous Lux Aeterna while the late Drei Phantasien (on texts by Friedrich Holderlin) described by Ligeti himself as 'emotional, «onomatopoetic», overwrought, 16-voiced pieces (not micropolyphonic!)' is an example of his late Post-Modernist style. For this very special and demanding repertoire, both teacher and student are in good hands with the Danish National Vocal Ensemble and conductor Marcus Creed. Audiophiles will also be richly rewarded with the vivid imaging and 'as real as it gets' sonic presence thanks to producer Michael Emery and technician Mikkel Nymand. A Dolby Atmos release is being planned."

[Lux Aeterna] receives a performance of great virtuosity and breathtaking subtlety from the Danish National Vocal Ensemble under Marcus Creed. For anyone unfamiliar with this repertoire, the disc will indeed shine new light on what choirs can do, and it covers a range of Ligeti’s choral music.

It’s difficult to imagine these works being sung much better than this.