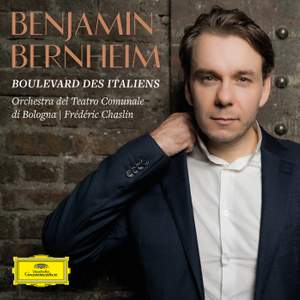 There’s something of the young Roberto Alagna about Bernheim’s tenor, a bright, open sound, unforced and with a sunny smile in his voice. — Gramophone Magazine, May 2022 More…

Recording of the Week,  Franco-Italian recitals from Benjamin Bernheim and Pene Pati

Bernheim traces the history of Italian composers in Paris with his customary elegance and eloquence, whilst Pati's equally impressive debut on Warner reveals a voice of immense character and versatility.

Documenting more than a hundred years of Italian operatic music in France, Benjamin Bernheim’s new album Boulevard des Italiens. Music stretching from Spontini’s La Vestale to Mascagni’s Amica – all sung in French – receives gold-star treatment from Bernheim, a tenor ideally placed to sing this repertoire in his native language. As he explains, “The aim was really to show the history of the French language in opera houses in Paris by way of these Italian composers who brought their pieces there. With the Opéra Garnier at one end, and the Opéra-Comique at the other, the Boulevard des Italiens is where it all happened.” Benjamin Bernheim has received widespread acclaim for both his stage performances and his 2019 debut album on Deutsche Grammophon, for whom he records exclusively. On Boulevard des Italiens, the singer hailed by Diapason as “the new star tenor” not only gives an object lesson in French operatic singing, with diction praised for its “miraculous clarity”, but provides a fascinating survey of the symbiotic relationship between Paris and generations of Italian composers.

There’s something of the young Roberto Alagna about Bernheim’s tenor, a bright, open sound, unforced and with a sunny smile in his voice.

Bernheim himself has risen to the challenge of shouldering the entire enterprise with finesse, dramatic intelligence and clean, shining tone almost unfailing, with sentience and freshness in the utterance of his native language, and with musicianly certainty in control of a note, a phrase or indeed a whole aria—in sum, with an artistic maturity that was already confidently promised by that first recital disc but which this second wholly confirms.

The seamless integration of Bernheim’s voice is a joy in itself, as are his elegant phrasing, immaculate diction and subtle characterisations: the heart of the album, for me, is the extended version of the ‘Friendship Duet’ from Don Carlos, in which he and his compatriot Florian Sempey capture the intimacy of the two men’s bond (and the anxieties which beset them) to perfection.

Bernheim’s innate lyricism and pinpoint diction are a perfect match for arias from Madame Butterfly, Don Carlos, La Fille du régiment, Les vêpres siciliennes, Tosca and more, his mellifluous musicality showcasing sung French as engrossingly as it does the works themselves.