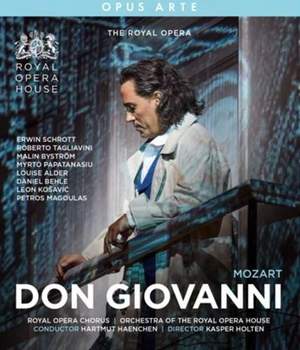 The production mixes and matches the Prague and Vienna versions of the opera in an uncritical way, with Holten’s Giovanni not dragged off to hell and the moral edge of the final ensemble blunted... — BBC Music Magazine, July 2022, 3 out of 5 stars (Performance) / 4 out of 5 stars (Picture and Sound) More…

Kasper Holten’s 2014 production of Don Giovanni for the Royal Opera offers a glimpse inside the mind of one of opera’s most notorious seducers. With a spectacular revolving set by award-winning designer Es Devlin, ingenious video projections by Luke Halls, and an ‘ideal cast on world beating form’ (The Independent), this staging brings Mozart’s dazzling score to life, in all its wit, glamour, and darkness.

“… this is one of the most musically magnificent productions of this work I’ve ever seen,” – The Independent ★★★★

“…A stunning evening… with Roberto Tagliavini’s Leporello and Erwin Schrott’s Giovanni we get a definitive pairing.” – Independent ★★★★

“The Royal Opera’s Mozart staging is even better this time around… Erwin Schrott’s magnificently sung assumption of the title role is one asset… Malin Byström is superbly credible asn vocally majestic… The show is conducted solidly...” – The Times ★★★★

“Erwirn Schrott delivers as the would-be seducer…” – The Arts Desk

“An unforgettable performance by Erwin Schrott…” – The Stage ★★★★

The production mixes and matches the Prague and Vienna versions of the opera in an uncritical way, with Holten’s Giovanni not dragged off to hell and the moral edge of the final ensemble blunted as the survivors pronounce judgement off stage. Holten’s Don is a fine fellow out for a good time, with Erwin Schrott every inch stripped to the waistrel and ready to give the girls what ‘they desire’.