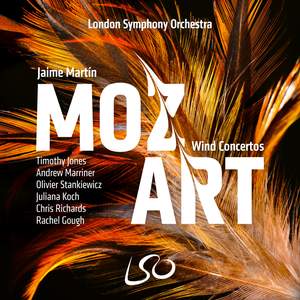 You would expect the principal woodwind players of a team in the London Symphony Orchestra’s league to perform at stellar technical level. Even more striking, and highly appealing besides, is... — BBC Music Magazine, January 2022, 5 out of 5 stars (Performance) / 4 out of 5 stars (Recording) More…

The Spanish conductor talks to Katherine about swapping his flute for a baton, his recent recording of Mozart Wind Concertos with the London Symphony Orchestra, and taking up his new role as Chief Conductor of the Melbourne Symphony Orchestra this season.

Principal players of the London Symphony Orchestra display their virtuosic talents on this album of concertos for wind instruments by Mozart, recorded in concert with conductor Jaime Martín in the excellent acoustic of the Jerwood Hall at LSO St Luke’s.

Complementing these works is a performance of the beautiful Sinfonia Concertante (K297b), in which oboist Juliana Koch, clarinettist Chris Richards, and bassoonist Rachel Gough join Timothy Jones in the solo roles.

Also included is a recording of Mozart’s popular Serenade No 10, ‘Gran Partita’, performed by the LSO Wind Ensemble.

You would expect the principal woodwind players of a team in the London Symphony Orchestra’s league to perform at stellar technical level. Even more striking, and highly appealing besides, is the musical spirit that’s in evidence here throughout, and which suits Mozart’s music to near perfection.

Martín ensures the accompaniments never fall back upon routine…the persuasiveness of the musicianship on display throughout is its own recommendation.

Martín enjoyed a top-flight career as a flautist for many years (often playing in sections alongside some of the musicians here) before switching to conducting, and he really does seem to breathe and phrase as one with the soloists. First among equals is Olivier Stankiewicz, whose stratospheric cadenzas in the Oboe Concerto go beyond what I'd thought possible on the instrument. All the while sustaining absolute beauty of tone.