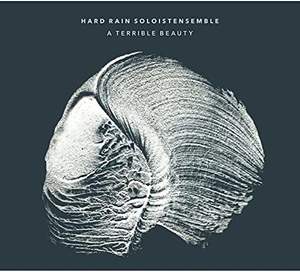 O'Leary: beneath the dark blue waves

Caffrey: Three Movements on the work of William Scott

Diatribe Records proudly presents A Terrible Beauty, a new double-CD anthology by Northern Ireland's leading contemporary music ensemble Hard Rain SoloistEnsemble. Celebrating the diversity and depth of compositional talent working in Ireland today, A Terrible Beauty showcases the new works created as part of Hard Rain's ongoing commissioning scheme. The release features a broad cross-section of leading Irish composers, including compositions by John Buckley, Greg Caffrey, Rhona Clarke, Frank Corcoran, Kevin O'Connell, Jane O'Leary, Iain McCurdy, Simon Mawhinney, Ryan Molloy, Gr?inne Mulvey, and Amy Rooney. A Terrible Beauty was recorded at the state-of-the-art Sonic Lab in the Sonic Arts Research Centre at Queen's University Belfast, where HRSE is currently Ensemble in Residence. The disc takes its name from Greg Caffrey's eponymous trilogy, which emerged over a seven-year period of Hard Rain's concert giving, inspired by the poetry of W.B. Yeats. A Terrible Beauty, which also exists in an orchestral version, was lauded as a "recommended work" by illustrious composers Magnus Lindberg and Erkki-Sven-Tuur and it is presented here in its entirety on CD for the first time. The Hard Rain SoloistEnsemble's remit is to give voice to composers from Ireland and to situate their music in a wider contemporary European and International context. It aims to programme music that otherwise cannot be heard live locally, while serving as an outlet for the talent of highly specialist performers, acting as a meeting point for their innovation, ideas and enthusiasm. The ensemble was founded in 2013 by the composer Dr. Greg Caffrey, who remains Artistic Director. The release will be celebrated by launch events at Queen's University, Belfast on October 9th and at the Contemporary Music Centre, Dublin on October 10th 2021. Hard Rain SoloistEnsemble is supported by the National Lottery through the Arts Council of Northern Ireland and is a PRS Foundation Talent Development Partner supported by PPL.