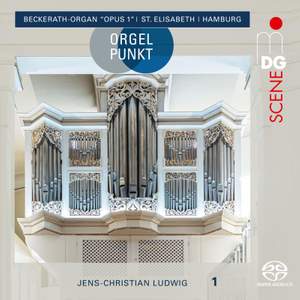 Handel: Arrival of the Queen of Sheba (from Solomon)

Rudolf von Beckerath built his very first organ for the St. Elisabeth Church in Hamburg. The 'Opus 1' of the later world-famous organ builder has recently been restored to its former glory. Despite the extensive expansion of the instrument, it can still be played unchanged in its original state due to a technical refinement.

Most of the pieces have a direct connection to Hamburg. In the case of Telemann and Carl Philipp Emanuel Bach, this is obvious from their biographies. Bach and Handel also have their Hanseatic points of contact. And the pieces from France and England are easily justified by Hamburg's well-known internationalism.

This Super Audio CD is produced in splendid three-dimensional sound.