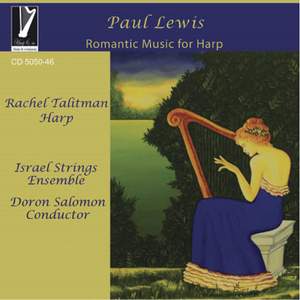 "When Rachel Talitman suggested a work for harp and string quintet the subject matter immediately sprang to mind. Both she and I had a Russian Jewish grandfather; mine spawned a generation of musicians. Shalom Chaverim is a traditional song of farewell to old friends, Hava Nagila is a 19th century melody of Ukrainian origin and an elegy in memory of my wife's aunt, Helen Corran, who left England with her Jewish husband to live in the Mevo Hama Kibbutz, completes the suite.

Amboise in France is my favourite Loire Valley city. Though it was the historic architecture that first attracted me, the memories I celebrate in these two solo harp pieces reflect the heartfelt hospitality I have always received there.

World War Two: a man and a woman see one another through the fence at a Nazi concentration camp and fall in love. They survive the war but neither knows if the other is still alive. Many years pass; they never forget each other, then suddenly they meet by chance, recognise one another and realise they are still in love." - Paul Lewis

Rachel Talitman created her independent label Harp&Co, aiming to instigate mainly first recording of the harp repertory. The discography of Rachel Talitman is varied and original, covering different unknown registers concertos, chamber music and recitals, and many compositions dedicated to her.