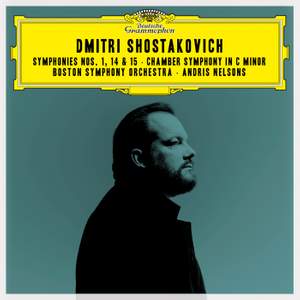 Recording of the Week,  Andris Nelsons conducts symphonies by Shostakovich

The latest instalment in the Boston Symphony Orchestra's cycle of Shostakovich symphonies juxtaposes the First and Fifteenth Symphonies, alongside expressive performances of the Fourteenth Symphony and the Chamber Symphony in C minor.

In this installment in 'an ongoing Shostakovich survey that has rightly won him three Grammy Awards' (New York Times), Andris Nelsons and the Boston Symphony Orchestra bookend the composer's brilliant, often turbulent symphonic career. Nearly half a century lies between Shostakovich's triumphant debut with the 'First', premiered before his 20th birthday, and the 'Fifteenth', an inventory of influences written under the shadow of his own mortality. Penned just two years earlier, the 'Fourteenth' is a symphonic song cycle, and the Chamber Symphony is a skillful adaptation of that tragic masterpiece, the Eighth String Quartet.

Nelsons’s scrupulous, atmospheric attention to dynamic detail, the Boston Symphony Orchestra’s sophisticated beauty and perfect engineering combine to give us finetuned mastery in Shostakovich’s last and most refined symphony, the Fifteenth.

All told, this installment in the cycle deserves a strong recommendation. There are arguably deeper readings of all three symphonies, but Nelsons and the BSO set a new standard for the merging of world-class playing and DG’s exceptional sound.

No question that this latest release represents the Nelsons cycle at its best.

It can be hard to make sense of [the Fifteenth Symphony], but Nelsons manages it wonderfully, enjoying the cheeky, incongruous nature of the Rossini quotations but also weaving in the Wagnerian references in an extremely moving way…In the Chamber Symphony, Op. 110a there's an extraordinary range of colours, plus immaculate playing from the Boston strings. Equally exceptional is the Fourteenth Symphony, where the first movement shows off the rich, sonorous sound of the double basses.

Fascinating couplings…The soloists in the 14th — a death-obsessed song-symphony dedicated to Britten — are outstanding.