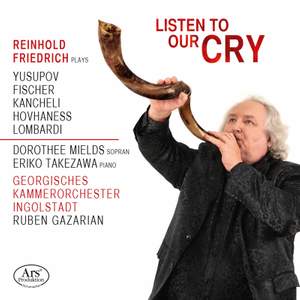 Listen to Our Cry

The recording for this CD were made during the pandemic under difficult conditions. The hope of the artists involved is to make their contribution so that culture will emerge from this crisis not weakened, but strengthened. Since winning second prize at the ARD International Music Competition in Munich in 1986 Reinhold Friedrich has appeared on all important stages of the national and international music scene. Numerous recordings give evidence of his comprehensive work. Since its move to Germany in 1990, the Georgian Chamber Orchestra has been based in Ingolstadt. The ensemble was founded in 1964 in Tbilisi/Georgia, as the Georgian State Chamber Orchestra; in 2014 it celebrated its fiftieth anniversary. After twenty-six years based in Tbilisi, the capital of Georgia, the orchestra moved to Ingolstadt, where it has made its second home for the last twenty-five years.