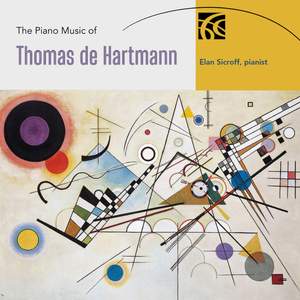 II. The Little Peasant as Big as a Thumb, with Moustaches Seven Miles Long

VI. Bab Yaga the Witch Goes a-Galloping, Through the Forest in Her Mortar, Pounding it With Her Pestle and Sweeping Away All Trace of Herself With a Broom

IX. The Princess of Whom One Never Tires of Admiring

XI. The Ride of Ivan Tsarevitch and the Princess on the Back of the Grey Wolf to the Kingdom of Marvels

XII. The Solemn Entrance of Ivan Tsarevitch and the Princess into the Kingdom of Marvels

I. The Music of the Stars 'Look into the depths of eternity'

II. The Dance of Life 'The banality of life that cannot be conquered by man'

Hartmann, T: Divertissements from Forece of Love and Sorcery, Op. 16