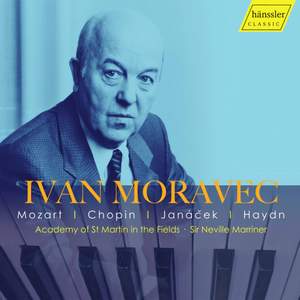 Academy of St Martin in the Fields, Sir Neville Marriner

Janáček: In the Mists

Mazurka in A Minor

"Long recognized as one of this century's great pianists, Ivan Moravec was born in Prague in 1930. He I ater studied piano at the Prague Conservatory and the Prague Academy, performing during his student years in Pol and and Hungary. In 1957, pianist Arturo Benedetti Michelangeli heard Mr. Moravec perform in Prague and invited him to Italy for further study. In 1959 he made his London debut. Ivan Moravec made his American debut in January 1964 with the Cleveland Orchestra and George Szell at Severance Hal I; the following month, he made his New York debut at Carnegie Hall during Cleveland's annual week of appearances there. Since then, he has performed with the New York Philharmonic, Chicago Symphony, Boston Symphony, the Philadelphia and Minnesota orchestras. As one of the world's most acclaimed recitalists, Mr. Moravec has appeared in recitals at Carnegie Hall and the Kennedy Center, and on the major recital series in Boston, Chicago, San Francisco, Cleveland and Philadelp hia. In Europe, Mr. Moravec was welcomed regularely as recitalist and concerto s oloist in the major music capitals, including London, Vienna, Amsterdam, Paris, Berlin, Leipzig, Dresden, Munich, Rome, Milan, Moscow and St. Petersburg."