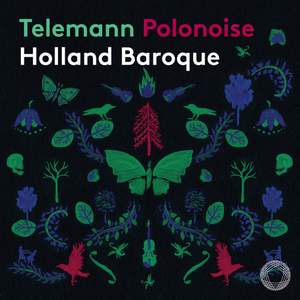 Much music on this disc has been recorded in the past. New, though, are several arrangements by the artistic leaders of the ensemble, Judith and Tineke Steenbrink...Holland Baroque, imaginatively... — BBC Music Magazine, March 2021, 4 out of 5 stars More…

Telemann: Overture-Suite in A Minor, TWV 55:a4

The players of Holland Baroque continue their PENTATONE journey with Polonoise, a programme for curious listeners who want to discover a different side of Telemann. His manuscript Danses d Polonie (TWV 45), in which he wrote down the dance music he heard during his Polish travels, was the impetus for this album. Taking this as a point of departure, Holland Baroque and violinist Aisslinn Nosky explore how Telemann applied the Polish style in his own works. Polonoise takes the listener on an imaginary journey to the wild nature, the slopes and the picturesque village taverns of Poland. Arranged by the ensemble's artistic leaders Judith and Tineke Steenbrink, Telemann's Polish concertos and dances sound brisker than ever before.

Holland Baroque is an original and innovative baroque orchestra that approaches baroque repertoire through a fresh and contemporary approach, with a focus on improvisation and collaborations with outstanding artists from different traditions. Polonoise is their second PENTATONE release, after their well-received Silk Baroque (2019), together with Wu Wei. Aisslinn Nosky, one of the most pioneering and adventurous violinists of the Northern-American early music scene, makes her PENTATONE debut.

Much music on this disc has been recorded in the past. New, though, are several arrangements by the artistic leaders of the ensemble, Judith and Tineke Steenbrink...Holland Baroque, imaginatively directed by Aisslinn Nosky, consists of three violins, viola, cello, lute and harpsichord. The playing is vivacious and full of character. The musical highlights are the two concertos...Two movements of particular charm are the Dolce and Largo, a haunting mazurka, of the Gmajor Concerto.

In recreating a sound world so often maligned with caricature – Telemann’s Polish style – they have opted for immersion...This sensory vividness truly comes across.