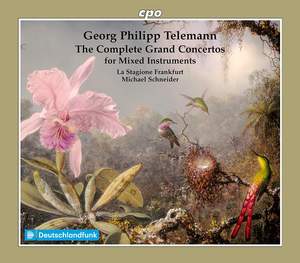 Telemann: Concerto for 2 Flutes and Oboe in B flat major, TWV 54:B1

Telemann: Concerto TWV 53:A2 in A major for flute, violin, cello, strings & b.c.

"After our sensational, standard-setting complete recording of Telemann’s wind concertos on eight CDs, we are presenting yet another Telemann edition, now with his concertos for mixed ensembles – works from the heart’s core of his oeuvre – on six CDs in a box set at a special price. Concerto performances featuring a wide range of instrumental groupings against the background of an accompanying string orchestra evidently stirred his creative imagination most strongly of all and inspired him – as Bach in his Brandenburg Concertos – to invent all sorts of different ensemble types. Here Telemann’s oft-cited 'mixed style' unfolds in all its bright color: French elegance, Italian brilliance, German erudition, and Polish-Hanakian spirit: we find all of the above in these gems of Late Baroque musical performance that often enough opens the door to Empfindsamkeit and the Sturm und Drang. And no better and more knowledgeable advocates for this project could be found than Michael Schneider and the soloists and musicians of La Stagione!"