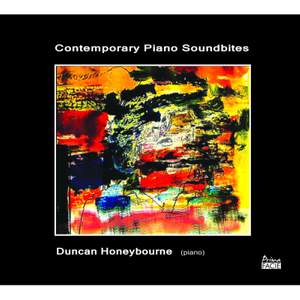 Pott: Poem of the Air

Harrison, S: In the Air

Gorb: After the Darkness

Oliver, B: From the Sublime to the Ridiculous

Jenkins, H: I Hear You Mr Blackbird I

Contemporary Piano Soundbites is a collection of solo piano miniatures composed during the 2020 coronavirus lockdown and premiered on video during the months of April, May and June. The project, which ranked in the top 10% of Just Giving fundraisers nationally during the month of April 2020, has already raised well over £2000 for the Help Musicians UK Coronavirus Hardship Fund, supporting musician colleagues struggling in the current situation. The disc, recorded in July 2020 under conditions of social distancing, presents a representative selection from the online series. It celebrates the diversity of styles embraced by a broad cross section of professional composers working today, and it was an invigorating experience to record an entire disc of pieces which hadn't existed less than four months earlier! Especially stimulating and exciting is the juxtaposition of several leading senior composers with some of their most gifted younger colleagues. Several young composers make their first appearances on disc.

The objective of this disc was fourfold: to imaginatively harness the zeitgeist of our present situation: to bring comfort and enjoyment to a large ready-made audience stuck at home, to aid musicians badly affected by the "cultural lockdown" and to add to the contemporary repertoire, creating an artistic keepsake of this extraordinary phase in our history.

Duncan Honeybourne enjoys a colourful and diverse career as a pianist and in music education. His debut in 1998 as concerto soloist at Symphony Hall, Birmingham, and the National Concert Hall, Dublin, was broadcast on radio and television, and recital debuts included London, Paris and international festivals in Belgium and Switzerland.

Commended by International Piano magazine for his "glittering performances", Duncan has toured extensively in the UK, Ireland and Europe as solo recitalist, concerto soloist and chamber musician, appearing at major venues and leading festivals. His solo performances have been frequently broadcast worldwide, including many appearances on BBC Radio 3 and TV, Irish, French, Swiss, Austrian, Belgian, Dutch and German Radio, ABC (Australia) and Radio New Zealand. His career has developed a strong focus on 20th and 21st century British piano music, and he has premiered 70 new solo works written for him by leading composers, including John Joubert's third piano sonata, three piano cycles by Sadie Harrison and the Andrew Downes Piano Concerto at Birmingham Town Hall in 2009. Duncan's solo recordings have been awarded 5 stars in Musical Opinion and International Piano, and featured as MusicWeb International Recording of the Year, CD of the Week on FMR Radio in South Africa and Recommended CD on ORF Austrian Radio's national cultural network.

Duncan Honeybourne is a Piano Tutor at the University of Southampton and Sherborne School, and a frequent masterclass tutor, adjudicator and writer on music. He is Founder/Artistic Director of the Weymouth Lunchtime Chamber Concerts near his home in Dorset.