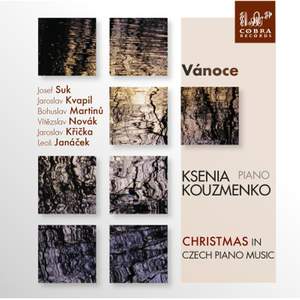 This program is a continuation of the two previous CD-projects with Czech music, "Whispering Leaves" (COBRA0069) and "Fenetre sur le jardin" (COBRA0070). This time the theme is Christmas ("Vanoce"), again with a number of world premieres of beautiful music which have been unjustly forgotten.

"Christmas Eve" and "A Child's Christmas Dream" by Josef Suk bring distinctly different Christmas atmospheres. The pieces are psychologically subtle, with many voices and complex harmonies, but always melodic, sincere, and generous.

The cycle "Vanoce" by Jaroslav Kvapil is the first world premiere on this CD. According to Ludvik Kundera, "it is not only the most personal work of Kvapil, but also an expression of an ardent life experience full of lyric beauty". Here Kvapil's spontaneous musicality blossoms, his inexhaustible melodic creativity and natural musical intuition. The immediacy and intensity with which he expresses his emotions brings to mind the compositional style of his teacher, Janacek.

Three short pieces ("Sledge", "Lullaby", and "Christmas Carol") by Bohuslav Martinu render the atmosphere of the Christmas period and things that typically belong in it: snowy fun on a sledge, a children's lullaby with magical bells which get more and more festive, and a merry Christmas pageant with singing and dancing.

Novak was one of the best known pupils of Dvorak and one of the most important Czech composers of the beginning of the 20th century. Two of his works are presented on this CD. The "Songs on Winter Nights" are extremely varied in character: after an amorous moonlit night follows a nightly storm, after a mystical Christmas night a burlesque carnival's night. The Christmas sonatina has a warmly lyrical and dance-like character. In the second part Nova 769;k uses an old song from the period of Jan Hus, which was traditionally sung during Epiphany.

One of Novak's best pupils was Jaroslav Kricka. His cycle "Intimate Pieces", the second world premiere, was a Christmas present in 1912 and seems to be a tonal declaration of love. The intensity of its lyrical expression streams from beginning to end. The last small piece, "Christ the Lord is born" by Leos 780; Janacek is a charming and tender piano version of a very well-known Czech Christmas carol from the 15th century.

Ksenia Kouzmenko is internationally renowned for her sensitive and technically accomplished piano playing, and is a much sought after partner in chamber music. She recently discovered the joy of playing on an Erard grand piano, with its inspiring sound possibilities.