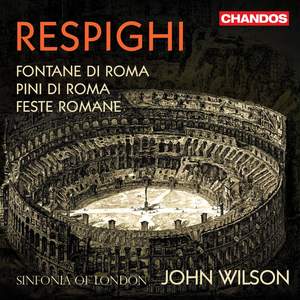 Wilson takes an altogether more balletic approach [than Tortelier]. But there is no lack of wallop: the opening of ‘Circenses’ has tremendous adrenaline…The Triton Fountain sparkles with vitality…There... — BBC Music Magazine, October 2020 More…

I. I pini di Villa Borghese

IV. I pini della Via Appia

For his third album with Sinfonia of London, John Wilson turns to Respighi's dazzling triptych of orchestral works depicting the city of Rome through the ages.

Following the widespread critical acclaim of their first two recordings including a BBC Music Magazine Award John Wilson and the Sinfonia of London turn to Respighis Roman Trilogy for their third release. Born in Bologna in 1879, Respighi trained as a violinist and composer, and travelled extensively. His influences are therefore wide-ranging, from Richard Strauss and Debussy to Rimsky-Korsakov (who taught him orchestration) in addition to a love of and fascination with Plainsong and music of the Italian baroque. Fountains of Rome was the first of these three great tone poems, composed between 1913 and 1916, and inspired by a series of photographs given to him by the artist Edita Broglio. Intensely programmatic, the work sees Respighi setting out to evoke sentiments and visions suggested by four of Romes fountains contemplated at the hour in which their character is most in harmony with the surrounding landscape, or in which their beauty appears most impressive to the observer... This recording was made in Surround Sound and is available as a Hybrid SACD.

Wilson takes an altogether more balletic approach [than Tortelier]. But there is no lack of wallop: the opening of ‘Circenses’ has tremendous adrenaline…The Triton Fountain sparkles with vitality…There are dozens of versions of Respighi’s ‘Roman Trilogy’ available, but I’ve heard none better than this. The orchestral playing is magnificent, and its joy and exuberance are a tonic at this anxious, isolated period.

This is a high-voltage interpretation, virtuosically played and strong on detail and drama, in which Wilson digs deep into the complexities both of Respighi’s at times eclectic imagination and his extraordinary powers of orchestration…Wilson and his orchestra more than hold their own against their rivals, and perhaps just have the edge over them thanks to Chandos’s superbly engineered recording, which is state-of-the-art, and absolutely stunning.

With dazzlingly inventive dashes of orchestration and demandingly intricate writing across all sections, these three pieces are the perfect vehicle to showcase the sensational virtuosity on offer from this ensemble..Although there are multiple instances where the whole orchestra screams in a ferocious frenzy, these episodes would lose their impact were they not surrounded by more nuanced playing. There are so many delicate touches and changing moods in all three of these pieces, and Wilson captures each one totally.

The meticulous Wilson is no less compelling [than Pappano], and he makes the music of all three scores sing with an Italianate accent, while encouraging his players to heights of virtuosity, and a rich spectrum of dynamics and colour.

This disc is a joy: massive, audacious and vividly played.