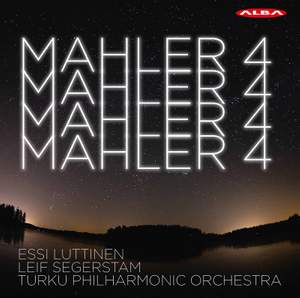 This somewhat unassuming release has a great deal going for it, not least the surprising variety Segerstam finds in such familiar music. It is warmly recommended as a thoroughly enjoyable listen... — Fanfare, Jan/Feb 2021 More…

The ten symphonies of Gustav Mahler (1860-1911) have sometimes been likened to a great autobiographical novel, each symphony constituting a chapter in itself while at the same time being an integral part of an unfolding narrative. Within this narrative flow, the fourth symphony (1899-1900) represents a magical pool of tranquility. Mahler drew on various sources in his symphony, one of them being Das himmlische Leben (1892). He originally intended this to be an independent song, but then had ideas of making it the finale of his giant third symphony before ultimately transferring it to his fourth. The song is a naïve vision of the joys of heaven seen through the eyes of a child; the symphony is, as a result, Mahlers most optimistic and relaxed. True, it does have some more shadowy moments, but they do not make the heart bleed or seriously disturb the overall mood.

This somewhat unassuming release has a great deal going for it, not least the surprising variety Segerstam finds in such familiar music. It is warmly recommended as a thoroughly enjoyable listen that surpasses recordings by some more famous conductors and world-class orchestras.