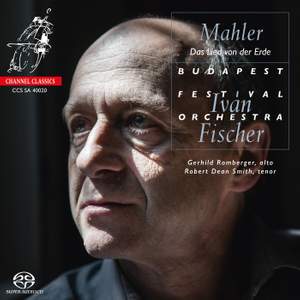 Robert Dean Smith is a strong heroic-tenor; the awkward middle-to-upper range writing seems no problem or strain for him, though he’s not the most expressive of interpreters...Fischer’s mezzo,... — BBC Music Magazine, November 2020, 4 out of 5 stars More…

From the symphony to the song would seem to be an enormous step: from the largest form for the largest orchestra to the smallest form for the smallest ensemble. Gustav Mahler nonetheless brought them together and interwove them in previous symphonies as well as in ‘Das Lied von der Erde’. "The long, endlessly stretched crescendo on the single note "e" (filled with so much desire) leads to the final part of Abschied, which I can only describe with the word ‘cosmic’. The voice is surrounded by floating meteors, objects, particles or stars, which move in various directions and speeds. We have left the atmosphere and look back on the beautiful green and blue planet." - Iván Fischer, conductor

Robert Dean Smith is a strong heroic-tenor; the awkward middle-to-upper range writing seems no problem or strain for him, though he’s not the most expressive of interpreters...Fischer’s mezzo, Gerhild Romberger, is possessed of a worldclass instrument, and makes a luminous, disembodied sound in her many meditative moments, slightly at the cost of articulating her native language.

Fischer is on a par with Haitink’s great Concertgebouw reading. The silkiness of the strings, weighted down by Mahler’s surrounding harmonies immediately after “Ich suche ruhe für mein einsam Herz,” is unutterably touching... Romberger’s breath control, so vital in this finale, is perfect.

Here’s a must-have for Mahler fans...The BFO’s playing makes this a standout performance. It’s fresh and irrepressible, woodwind reedy and nasal, horns bright and heroic, strings brilliant, with the final “Der Abschied” a half-hour’s music of draining intensity...Romberger and Smith are powerful and expressive.