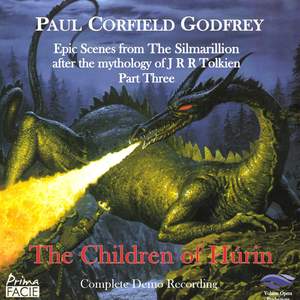 Godfrey, P C: Prologue: I Am the Elder King

Morwen the Wife of Húrin Remained Alone, Silent in Grief

Who Knows Now the Counsels of Morgoth?

It Is Hard, Túrin My Son

And Morwen Gave Birth to Her Child

The King Must Judge These Deeds

Then All Was Searched and Told

So Beleg Departed from Doriath

The Storm Rode Up out of the West

Thus Did Túrin Come to Nargothrond

And Finduilas, Daughter of Orodreth the King

Gwindor, Dear Friend, You Are Falling Back into Sadness

Daughter of the King, Let No Grief Lie Between Us

For I Love You, Gwindor, and I Am Ashamed That I Love You Not More

Then the Warriors of Nargothrond Went Forth

Leaves Fall from the Trees in a Cold Wind

Then Morwen Was Distraught and She Rode Forth with Niënor

Thus the Ladies Were Lost

Who Are You, and What Do You Here?

All My Deeds and Past Days

Around the Gloom Gathers, Darkness Grows Across the Sea

Though All to Ruin Fell the World

When Dusk Falls, We Must Creep to the River

Niniel, Fear Not the Worst

Have You Seen Her?

You Have Come at Last

Following on from the successful releases of both Beren and Luthien, and The Fall of Gondolin, Parts Two and Four of a series of "epic scenes" drawn from J R R Tolkien's posthumous writings for The Silmarillion, Prima Facie Records in collaboration with Volante Opera Productions now presents a recording on 2 CDs of The Children of Hurin, the third part of Paul Corfield Godfrey's cycle.

The Children of Hurin was, in 1982, the first part of the cycle to be composed, and employed a variety of posthumously published texts by the author with permission of the Tolkien Estate and the assistance of the late Christopher Tolkien - one of the people to whom this work is dedicated.

As before, the singers are all professional artists from Welsh National Opera, and the set makes available for the first time a fully representative recording of the music with the complete lyrics by Tolkien. Because of budgetary and other constraints, the orchestra is represented by sampled sets (using the sounds of real instruments) which have been carefully balanced and adjusted in collaboration with the composer to obtain as close a result to the sound of an actual orchestra as possible.

Commenting on this aspect, Brian Wilson in a review of The Fall of Gondolin for Music Web International remarked "I wondered how well this would work, but need have had no apprehensions; it works very well and it's the only way such a project could have been realised. I need only say that the music is often hauntingly beautiful." The booklet with this set of The Children of Hurin explains the methods of production in greater detail, and also includes an essay by the composer on the manner in which the author's text has been adapted for music.

Chris Seeman in his review of Beren and Lthien for the Tolkien Music List described the work as "a tour de force of words delivered with passion and epic grandeur. This is hands-down the most potent actualization of Tolkien's writing I have heard to date". In a comment on the earlier release of The Fall of Gondolin he described that work as "a superb rendition of an unparalleled story [whose] greatest virtue lies in its ability to enhance rather than overshadow that story."