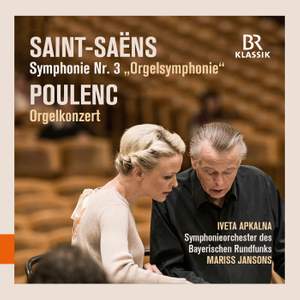 I can say that Apkalna is very musical and that the registers and voicing she selects are varied and colorful. The scale ranges from a delicate chamber organ to a walloping fortissimo with floor-shaking... — Fanfare, Jul/Aug 2020 More…

Two great symphonic organ concertos can be heard on the new CD from BR-KLASSIK: the famous Organ Symphony by Camille Saint-Saëns and the lesser-known but highly impressive Concerto for Organ, Strings and Timpani by Francis Poulenc. In his Symphony no. 3 in C minor, op. 78, Saint-Saëns succeeded in integrating the organ into the musical fabric of a symphonic work. Poulenc's Concerto for Organ, Strings and Timpani in G minor, Poulenc's only work for the organ, was composed in 1938. At a time when it was no longer customary to present a solo concerto for organ, the work - with its unusual choice of instruments - is a tribute to Johann Sebastian Bach. The Latvian concert organist Iveta Apkalna, who in 2005 was the first organist to receive an ECHO Klassik award, debuted in 2007 with the Berlin Philharmonic under Claudio Abbado and has performed all over the world ever since. In 2018, she received prestigious music awards in Latvia in the 'Musician of the Year' and 'Concert of the Year' categories, and that same year, as part of the centennial celebrations of the Republic of Latvia, she was awarded the highest state order of merit in the country.

I can say that Apkalna is very musical and that the registers and voicing she selects are varied and colorful. The scale ranges from a delicate chamber organ to a walloping fortissimo with floor-shaking pedal points and is totally engrossing. Also, I can’t overstate the excellence of the recorded sound, which makes everything vivid and natural without a hint of how difficult it is to balance organ and orchestra.