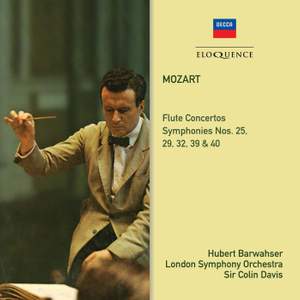 Mozart: Andante in C major, K315 for flute and orchestra

Three Philips albums of Mozart from the early years of Sir Colin Davis's half-century association with the London Symphony Orchestra, including several recordings new to CD. Known as a peerless interpreter of Berlioz, Sibelius and Tippett, Sir Colin Davis was devoted above all to the music of Mozart. Symphonies, concertos and serenades by Mozart formed much the largest part of Davis's early discography with several labels and ensembles. 'He simply knew how Mozart should go', recalled the film director Humphrey Burton after the conductor's death in 2013. A landmark event in his career occurred in 1959, when he took over performances of Don Giovanni in London from Carlo Maria Giulini, and record labels soon took notice of his Mozartian gifts and inclinations. He began to work regularly with the LSO in the early 1960s, and it was a relationship that quickly bore fruit in the recording studio with Symphonies Nos.39 and 40, which also marked the beginning of the 40-year-long relationship between the conductor and the Dutch Philips label. Symphonies Nos. 25, 29 and 32 followed in 1964, likewise newly minted, rhythmically buoyant and quite foreign to the 'grand old man' style of Mozart playing then prevalent, and which Davis himself cultivated to a degree in the latter stages of his career. These recordings were welcomed as 'young man's Mozart' respecting tradition but not in hock to it, reflecting Harold Rosenthal's early praise of Davis in the pit. 'Not since the departure from London of [Erich] Kleiber have we heard a Mozart opera directed with such musicality, style and rhythm, or so beautifully shaped'. The third LP reissued in this generous compilation contained the two concertos written by Mozart for the flute: an instrument for which he apparently held no great affection, but produced all the same two works of boundless invention. The soloist was the Dutch-born, German flautist Hubert Barwahser (1906-1985) who had been recording for Philips since the labels earliest days, both as a soloist and as principal flautist of the Concertgebouw Orchestra.

'The G major Symphony No.32 almost steals the show here, so vivaciously alert in the playing. But the spontaneity of the other performances is striking too, and Davis achieves a splendid rhythmic spring in the opening Allegro of No.25.' Penguin Guide, 1982 (Symphonies Nos. 25, 2& 32).

'The performances are strong and straightforward, refreshingly alive and stylish. This version of the G minor Symphony [No.40] is one of the most recommendable ever issued, and the sound retains its bloom'. Penguin Guide, 1982 (Symphonies Nos. 39 & 40)