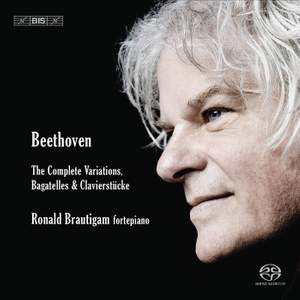 No. 2 in C Major, Scherzo. Allegro

No. 3 in F Major, Allegretto

No. 1 in G Minor, Allegretto

No. 4 in A Major, Andante cantabile

No. 6 in G Major, Andante - Allegretto

No. 8 in C Major, Moderato cantabile

No. 9 in A Minor, Vivace moderato

No. 10 in A Major, Allegramente

Beethoven: Allegretto in B minor WoO 61

No. 3 in E-Flat Major, Andante

No. 5 in G Major, Quasi allegretto

Beethoven: Variations (10) in B-flat major on the duet 'La stessa, la stessissima' from the opera Falstaff by Antonio Salieri, WoO 73

Beethoven: Variations (6) on an original theme in G major for Piano, WoO 77

Beethoven: Variations (9) on a March by Dressler, WoO 63

Beethoven: Variations (6) in F major on a Swiss Song, WoO 64

Beethoven: Rondo in A major, WoO 49

Beethoven: Rondo a capriccio in G major, Op. 129 ‘Rage over a lost penny'

Beethoven: Variations (6) for Piano on an Original Theme in F major, Op. 34

Beethoven: Variations (32) on an Original Theme in C minor, WoO 80

Beethoven: Allemande in A major WoO 81

No. 1, Air ecossais in G Major "The Cottage Maid"

No. 2, Air ecossais in C Minor "Of Noble Stock Was Shinkin"

No. 3, Air autrichien in C Major "A Schüsserl und a Reindl"

No. 4, Air ecossais in E-Flat Major "The Last Rose of Summer"

Between 2003 and 2015, Ronald Brautigam recorded all of Beethoven’s music for solo piano – a huge undertaking resulting in a grand total of 15 highly acclaimed albums. Choosing to perform the works on the fortepiano, Brautigam began with a sonata cycle which caused one reviewer to talk of a challenge to ‘the very notion of playing this music on modern instruments, a stylistic paradigm shift.’ In 2010, after nine albums of sonatas, he went on to record the composer’s variations, bagatelles and other piano pieces – a staggering array of works ranging from a Bagatelle lasting 11 seconds to the monumental Diabelli Variations, and from a charming Rondo in C major composed by a 13-year old Beethoven, to what is often referred to as the composer's ‘Last Musical Thought’, an Andante maestoso dated 1826. Brautigam’s sonata recordings were released in a box set in 2014, and they are now followed by this 6-album set of the remaining works for solo piano, in the original hybrid format, and with full documentation in the form of the original booklets. Composed over the course of more than 40 years, the music is performed on three different instruments, all by the master builder Paul McNulty, demonstrating the rapid development that the fortepiano underwent during Beethoven’s lifetime.

Brautigam’s fortepiano survey is magnificent, comprising four full discs of variations (including Eroica and Diabelli), the complete bagatelles, rondos and other miscellaneous pieces. Disc 1 begins with a charming rendition of the Op 33 set followed by a tranche of pieces dating mainly from the 1790s; the late sets Opp 119 and 126 are delivered with a sense of simplicity that can only come from depth of knowledge. The recording, configured for 5.0 stereo, is exemplary.