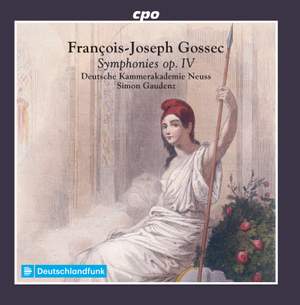 The orchestra gives us brisk, energetic, and stylish performances in the by-now familiar period-influenced style adapted to modern instruments. The strings in particular handle some virtuosic... — Fanfare, January/February 2020 More…

The symphonic cycle being presented here for the first time in complete recorded form was written thirty years prior to 1789. Gossecs some fifty symphonies doubtless make him the most important French symphonist of the second half of the eighteenth century. However, he wrote most of his symphonic works prior to about 1780; after this date the increasing popularity of Haydns symphonies in Paris may have caused him to lose interest in this genre. When compared with the first series from 1756, they offer considerable innovations even in purely formal matters: they have four movements, and oboes and/or horns have been added to the instrumentation used in op. III, which was exclusively for strings. The symphonies are distinguished primarily by attention-grabbing initial displays, though the last two form exceptions to the rule. No. 5, the Pastorella, has a title indicating that it is a work of pastoral character, that is, of country expression, while No. 6 does not make use of the characteristic stylistic elements, such as long crescendo passages and sudden forte-piano contrasts, presumably imparted to Gossec by Stamitz.

The orchestra gives us brisk, energetic, and stylish performances in the by-now familiar period-influenced style adapted to modern instruments. The strings in particular handle some virtuosic runs with aplomb. This is a most interesting release that sheds some new light on the early symphony.