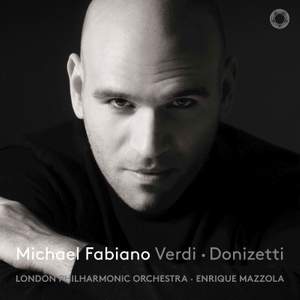 Fabiano is at his best in those great Verdian oaths of vengeance such as ‘Sprezzo la vita’ from Ernani. For complicated reasons it is usually cut in performance, but Fabiano shows us just what... — BBC Music Magazine, August 2019, 4 out of 5 stars (Performance0 / 5 out of 5 stars (Recording) More…

Excerpt,  Verdi: I Due Foscari

The charismatic American tenor talks to Katherine about his debut solo recording on Pentatone, centring on two composers who have played a pivotal role in his career to date.

American star tenor Michael Fabiano presents a spectacular set of scenes taken from late Donizetti and middle Verdi operas, revealing the strong ties between these two composers. The album documents a paradigmatic shift in Italian opera, from the beautiful lines and crispness of belcanto to a richer, more dramatic musical universe. The historical line stretches from Donizetti’s Lucia di Lammermoor, Poliuto and Maria di Rohan to mature Verdi operas such as Rigoletto, Un ballo in maschera and Don Carlos. In many cases, Fabiano has selected original, rarely-heard versions, including the thunderous ‘Qual sangue sparsi’ from the original St. Petersburg edition of La forza del destino.

Together, these arias and scenes constitute a world full of heartfelt tenderness and fire-laden drama. After numerous successes on the opera stage, this is Michael Fabiano’s debut album on PENTATONE.

Fabiano is at his best in those great Verdian oaths of vengeance such as ‘Sprezzo la vita’ from Ernani. For complicated reasons it is usually cut in performance, but Fabiano shows us just what we are missing as his lashing phrases unite with the fervent crowd (sung by the London Voices) and the brilliant, searing sounds of the London Philharmonic Orchestra…Still, what happens on a recording is of course only half the story: Fabiano’s acclaimed impact on stage needs to be experienced in the theatre.