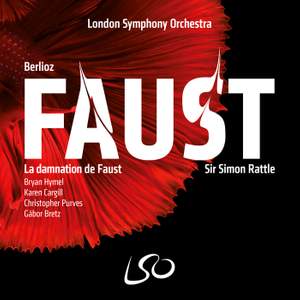 The work and its style – especially the virtuosity and panache required – have clearly remained in the orchestra’s collective memory…Overall it’s a tightly organised and carefully paced achievement... — Gramophone Magazine, May 2019 More…

In 2019 the classical world will mark 150 years since the death of Berlioz and this album will be released around anniversary of his passing.

The LSO are known globally as leading Berlioz performers and have a large, award-winning back catalogue of the composer’s work.

Sir Simon Rattle describes Faust as “like the birth of cinema,” a unique mix of opera, oratorio and drama.

The work and its style – especially the virtuosity and panache required – have clearly remained in the orchestra’s collective memory…Overall it’s a tightly organised and carefully paced achievement from the conductor. The soloists and chorus match his lead well…There’s no lack of either angst of love in Bryan Hymel’s emotional and stylish reading of the title-part and a special richness about Karen Cargill’s fantasies as Marguerite…Purves manages both wit and a specially sleazy nastiness as the victorious Devil.

Hymel’s Faust is the most convincing soloist. But it’s the vivid detail Rattle conjures up, the brilliant playing and the force and intensity of the choral singing that give greatest satisfaction.