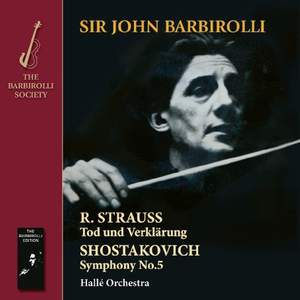 This broadcast concert by Sir John Barbirolli and the Hallé Orchestra from January 1963 paired works by Richard Strauss and Shostakovich, and from which our recordings are taken, is an exceptional one. Certainly, in so far as Barbirolli’s concert repertoire is concerned, this programme was notable for being the first occasion when he conducted Shostakovich’s mighty Fifth Symphony.

Of the two purely orchestral works making up this broadcast concert it was the earlier composition, Richard Strauss’s tone poem Tod und Verklärung which began the programme. Although the subject-matter of the work (depicting the death of an artist) may appear to some as rather meretricious, in a dramatically powerful and committed account – such as Barbirolli undoubtedly secured from the Hallé on this occasion – the music can be both emotionally quite moving and structurally completely satisfying. On hearing Barbirolli’s masterly account, one could be forgiven for thinking he had conducted this work many times throughout his life. This occasion was not the first time Sir John had essayed the work, but it had not appeared in his programmes for quite a few years; yet again, he delivered a performance that went to the very heart of the work, his fellow-musicians in his Hallé Orchestra responding with full-hearted and committed artistry.

In January 1963, a quarter of a century after that remarkable premiere of Shostakovich’s Fifth, and in defiance of the work’s detractors, Barbirolli secured a demonstrably excellent performance, free from any exaggeration. Barbirolli’s performance is so superlatively good that one’s attention is held throughout, especially in the slow movement, which contains some very beautiful music. One must also mention the inherent warmth of the Hallé Orchestra’s corporate sound: theirs is no transcontinental brilliance, with hard-cutting brass and massive string strength – such qualities are impressive in themselves, and suit certain schools of composition admirably – but as we may hear from this recording, the result in the Hallé’s case is an almost tangible, if difficult to describe, sense of inner cohesion, from which Barbirolli draws the finest shades of interpretation – ranging from great power and warmth to gossamer delicacy.

Here is a further example of the artistic truth of Barbirolli’s interpretative genius, and we must thank the Barbirolli Society who have rescued and made available this great performance for later generations.