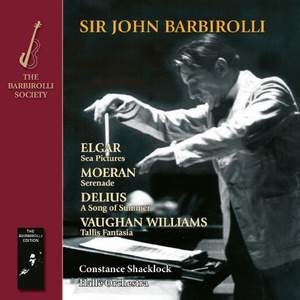 Delius: A Song of Summer

Vaughan Williams: Fantasia on a Theme by Thomas Tallis

Sea Pictures was performed more often by Sir John Barbirolli than by almost any other British conductor, his singers being Kathleen Ferrier, Norma Proctor, Constance Shacklock, Janet Baker and Kerstin Meyer – the performance with Meyer being part of the penultimate concert he ever conducted, at the King’s Lynn Festival in 1971.

Sea Pictures remains a very difficult work for the soloist: the range required is exceptional. In addition, Elgar’s word-setting in that final song (The Swimmer) is highly demanding, with very few pauses for breathing-space. Not all contraltos feel able to tackle this remarkable masterpiece, but Constance Shacklock, truly, one of the finest contraltos – along with her near-contemporary, Kathleen Ferrier – England ever produced, has more than the fullmeasure of the composer’s demands, and she is supported to the hilt by Barbirolli, whose atmospheric tempo-setting for each song is exceptional. This performance is a 1958 broadcast from the Royal Albert Hall.

E.J. Moeran’s Serenade has a curious interest of its own, in that the original 8-movement version of the Serenade was premiered in 1948, but on publication two movements (Intermezzo and Forlane) were withdrawn – for reasons which are not entirely clear.

In this very rare live performance from the 1952 Cheltenham Festival, Barbirolli restores the Intermezzo which reinforces the natural musical language of the composer, perhaps owing something to the folk-based stylisation of Peter Warlock’s Capriol Suite of 1926. Moeran’s Serenade, however, is no mere reflection of Warlock’s piece, but an individual work of great inherent beauty. Judging by the care and empathy with which Barbirolli invests the work, it clearly had great appeal for the conductor and his orchestra.

The other works here are Delius’s A Song of Summer (a 1945 broadcast) and the Fantasia on a theme by Thomas Tallis by Vaughan Williams in a performance from the Grieghallen in Bergen in 1963.