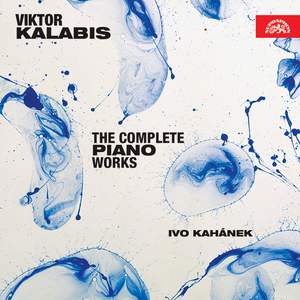 The very first complete recording of Viktor Kalabis's piano works, as well as the album of his three sonatas (SU 4210-2, Supraphon 2018) have come to fruition upon the initiative and owing to the relentless enthusiasm of the world-renowned harpsichordist Zuzana Růžičková, the composer's wife and a keen promoter of his oeuvre. Of major importance was the selection of the pianist - one possessing superlative technical skills and having a profound understanding of the structure of Kalabis's music. As Ivo Kahánek put it: "Kalabis was one of the composers who don't restrict their ideas by the traditional laws of the piano technique, hence his music is now and then extremely difficult to perform." Even though Kalabis drew inspiration from the music of other 20th-century masters, he soon arrived at his own, singular and unique musical idiom, which is already palpable in his early opuses. The album maps more than half a century of Kalabis's work, from the post-war Sonata No. 1 to the masterful miniatures dating from the very end of the millennium. Following the critically acclaimed recordings of his symphonic and concert pieces (SU 4109-2 - Choc de Classica, Gramophone Editor's Choice), and of the three sonatas, the present album opens yet another window into Viktor Kalabis's fascinating musical world.

The first complete album of Viktor Kalabis's piano works. A world unto itself.

Ivo Kahánek, who played so superbly on the album of the Kalabis instrumental sonatas, completely out-does himself here. It’s impossible to conceive of more devoted, meticulously conceived interpretations, or any that could be more thoroughly musical, or indeed of another interpreter who would approach this extremely demanding music with a more single-minded seriousness of purpose. Kalabis’s piano music was obviously not intended for everyone. But for those willing to be as serious as it is, the rewards could be considerable.

The nine works, all recorded in Prague’s Martinů Hall during 2016-8, provide a very detailed overview of Kalabis’ range and development. Three sonatas fill disc one, the first written in a robust postwar neo-Stravinskyan style, its successor taking the form of a gentler, Bachian diptych. The Third (1982) is again in two movements, at times hauntingly severe, at times volcanic. The works on the second disc are generally lighter in tone. Supraphon’s sound is very good, catching every nuance.