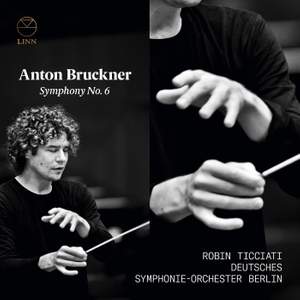 Having won acclaim for his recent recordings of French repertoire, Robin Ticciati now turns to the music of Anton Bruckner.

Ticciati is well suited to conducting Bruckner with an approach that is both “expansive and revelatory” (The Guardian).

Having already performed this work with the Bergen Philharmonic and Vienna Symphony Orchestras, Ticciati returned to Berlin to continue his recording series with the Deutsches Symphonie-Orchester.

Bruckner broke new ground with his Sixth Symphony; its meandering harmonies, intricate rhythms and imaginative instrumentation are coupled with contrasting moods and a theme that moves satisfyingly from dark to light.

Occasionally overshadowed by the more familiar Fifth and Seventh symphonies, the Sixth has many extraordinary moments, including the astonishing Scherzo.

Notably this was the first work that the self-doubting composer did not seek to revise.

Ticciati describes this symphony as “wild, daring and risky”, a perfect pairing for this engaging and charismatic conductor.