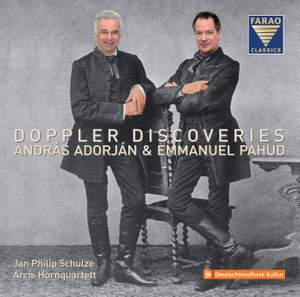 With his discoveries, András Adorján has put paid to the long-held misconception that the works for flute by the Doppler brothers consist only of popular paraphrases, potpourris and variations. In the early 1970s, for example, he found an unpublished and thus unknown Double Concerto for two flutes by Franz Doppler, and recently among several other works that were thought to be lost a Sonata by the same composer. As if the Double Concerto had been just the composition the flute world was waiting for, it immediately became a standard work in the repertoire. It has been very frequently performed since then and was already recorded in 1976 by András Adorján together with the doyen of flautists, Jean-Pierre Rampal (ERATO). Now, these new Doppler 'Discoveries' are also so attractive that the most eminent representative of the current flute scene, Emmanuel Pahud, enthusiastically agreed to help record them. With their highly appealing musical effects, the Doppler brothers have thus managed to create a bridge between two leading flautists of their respective generations.