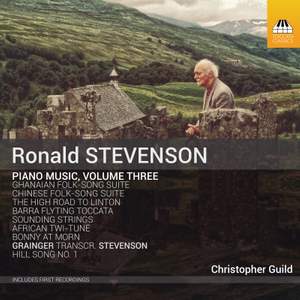 No. 5, The Sheep Under the Snow

No. 8, Tune from County Derry

No. 14, The Christ Child's Lullaby

I. The Washer-woman and the Flower-girl

V. Song of the Crab-fisher

I. Song of Valour

trad.: The High Road to Linton

The Scottish composer Ronald Stevenson (1928–2015) was a virtuoso concert pianist in the tradition of Beethoven, Liszt and Rachmaninov but, like his friend Percy Grainger, he was also fascinated by the folk musics of the world. This third album of his piano music juxtaposes his arrangements of Celtic – Breton, Cornish, Irish, Manx, Scots and Welsh – folk-songs and -dances with his Chinese and Ghanaian Folk-Song Suites and his resourceful transcription of Grainger’s visionary Hill Song No. 1 for wind band, here realised as an expansive tone-poem for the piano. This is the third instalment of Christopher Guild’s exploration of Ronald Stevenson’s music –a crusade he will soon be extending to other Scottish composers.

Affecting poetry and blood-stirring fire in confluence with folk voices and an over-arching simplicity.