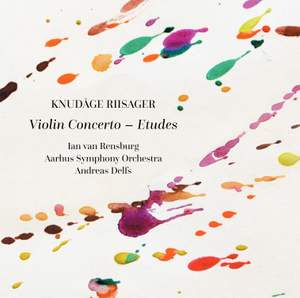 Drawn to the ‘twinkle in the eye’ in Carl Czerny’s Etudes, Knudåge Riisager (1897-1974) wanted them to ‘sparkle like the fizz in mineral water’ when he made his orchestral renderings in the late 1940s. When those scores were refashioned for a ballet, Riisager invested them with even more of his trademark buoyancy and colour. But change was to come with the composer’s Violin Concerto of a few years later. The shift in style reveals the composer’s deep and developing thoughts on musical contrast, instrumental naturalness and concerto form and is realised vividly on this new recording from the Aarhus Symphony Orchestra and Ian van Rensburg.