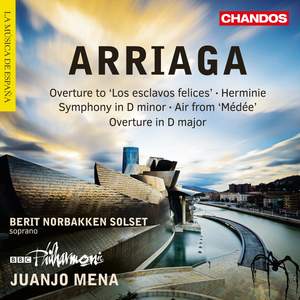 Elements in Arriaga’s sole symphony might smack too much of the Conservatoire, but tread throughout are airy pleasures, Spanish sunshine, and unexpected harmonic kicks…There are further delights... — BBC Music Magazine, March 2019, 4 out of 5 stars More…

No. 6, Tancrède me devra le jour

Spanish music specialist and former Chief Conductor of the BBC Philharmonic Juanjo Mena continues the series La Música de España, with another important Spanish composer: Juan Crisóstomo de Arriaga, nicknamed after his death as ‘the Spanish Mozart’. The orchestral overture to ‘Los esclavos felices’ (The Happy Slaves) is all that remains of the opera, that the child prodigy Arriaga wrote aged 14. When Arriaga moved to Paris to study under Fétis, Guérin and Baillot in 1821, he revised the overture, making changes to the instrumentation and removing a third theme group, this version is heard on this recording. Air from Médée and Herminie form parts of the autograph volume ‘Ensayos lírico-dramáticos’ (Lyric-dramatic essays) that completes this release, here sung by one of Scandinavia’s most sought after concert singers, Berit Norbakken Solset. Tonally ambiguous, Symphony in D minor (which begins and ends in D major) alongside the Overture in D major, which was written ‘without having learnt the principles of harmony’ are proof that Arriaga’s premature death aged 19 was a ‘sad loss to Basque music’.

Elements in Arriaga’s sole symphony might smack too much of the Conservatoire, but tread throughout are airy pleasures, Spanish sunshine, and unexpected harmonic kicks…There are further delights in the fresh, pealing tones of the Norwegian soprano Berit Norbakken Solset…Mena conducts with the fervour expected from an Arriaga champion and a fellow Basque, and Chandos’s recording is wonderfully vivid. Buy and enjoy.

Herminie provides ample evidence of Arriaga’s keen dramatic instincts and ability to paint a scene…Solset sings both works vividly, and her fresh tone and satiny legato are delectable. The BCB Philharmonic winds relish the felicitous solos in both the D major Overture and the Symphony.

A most useful compendium of Arriaga’s music, lovingly performed in excellent sound.

It’s immediately apparent from the sunny, bubbling overture to the opera Los esclavos felices (The Happy Slaves) why this teenager was dubbed ‘the Spanish Mozart’ – its effervescence recalls the overture to Le Nozze di Figaro as well as sharing the spirit of Arriaga’s contemporary Rossini – but it’s the nascent dramatic instinct on display in the cantata Herminie that really illustrates the potential of a composer who died before his twentieth birthday.

The Finale starts gravely – this is a D-minor Symphony after all, but it ends with a sense of major-keyed hopefulness, presented with utmost clarity.