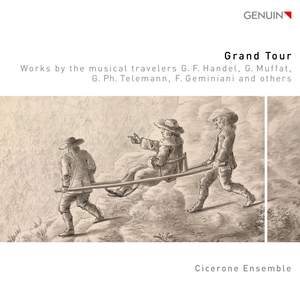 Flute Sonata in B Minor, BeRI 206: I. Larghetto

Listening to music is always a journey for the listener – but with the Ensemble Cicerone's new GENUIN album, the composers were already adventurers – people who, in the Baroque era, took to the dangerous roads on land and water all over Europe and ensured that musical styles met and mixed. The musicians of the ensemble, which bears in its name the great travel guidebooks, teach at the Mozarteum and at the Cologne University of Music: they let the intricate paths of emotions arise before our inner ears in the wonderful music of Handel, Muffat, Telemann, and others and thus cast a spell on us. Better than Baedeker! For the Cicerone Ensemble, just playing music is not enough. Listening to historical music is only part of the experience the three young musicians set out to provide. Their goal is to showcase music and bring it to life like a tourist guide would an old painting or an ancient building, hence the name “Cicerone” (in Italian- “Guide”).

A fascinating and enjoyable programme, superbly and sensitively performed.