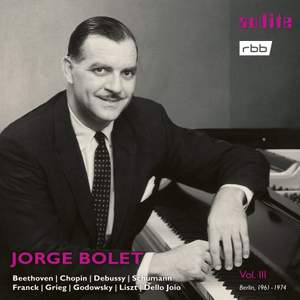 The sound quality throughout is amazingly good...there are several valuable additions to this great pianist’s discography. Not least among them is a superb live performance of the Emperor Concerto,... — Gramophone Magazine, March 2019 More…

With the exception of the Fledermaus paraphrase, all recordings are released for the first time. Once again, Bolet’s performances document his universality and unceasing inquisitiveness, as well as his phenomenal musicianship and ability to adapt his virtuosity to diverse works. These recordings are therefore invaluable documents of a musician who today is justly considered one of the greatest pianists of the twentieth century.

This selection comprises works of Beethoven, Chopin, Debussy, Dello Joio, Franck, Godowsky, Grieg, Liszt and Schumann. Beethoven’s Fifth Piano Concerto did not form part of Bolet’s regular repertoire: it is the only live recording on this edition. Further highlights include Schumann’s Third Piano Sonata as well as major works by Chopin, such as the complete Op.25 Études, in Bolet’s masterful, lyrical interpretations. As an “encore”, Bolet plays Godowsky’s Concert Paraphrase of Strauss’s Die Fledermaus.

The sound quality throughout is amazingly good...there are several valuable additions to this great pianist’s discography. Not least among them is a superb live performance of the Emperor Concerto, boasting an especially exuberant and forthright finale...Debussy is a composer who one does not normally associate with Bolet. Perhaps hearing him in Images Book 2 and Masques (both from 1961) will change perceptions...All in all, a pianophile delight.

This third and final volume of Jorge Bolet’s Berlin recordings (1961-1974) provides ample confirmation that he was one of the finest pianists of the 20th century. Bolet’s playing ranges from ‘blow your socks off’ virtuosity (heard here in the Strauss- Godowsky paraphrase on Die Fledermaus) to a ‘safety comes first’ approach. Transfers are admirable and these memorable discs come luxuriously packaged with several photos of Bolet.