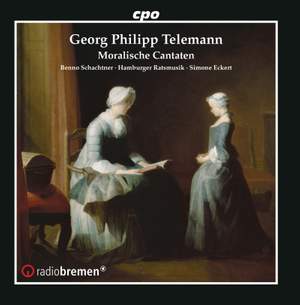 The Hamburger Ratsmusik – an ensemble looking back on a five-hundred-year history – teams up with the young countertenor Benno Schachtner on this recording of Georg Philipp Telemann's Six Moral Cantatas. Moral lessons from Telemann? Not at all! During the decades between 1720 and 1750 the middle class of the early Enlightenment sought moral education and ethical improvement deriving from human nature and reason as part of its never-ending quest for earthly happiness. It was with wit and charm that in his Moral Cantatas of 1735 Telemann set to music a poetic document conveying the spirit of this Enlightenment period. His only recently rediscovered Fantasies for Solo Viola da Gamba, published at the same time, are presented here in alternation with his Moral Cantatas, the title with which they were announced in a catalogue dating from August 1735. These two collections were first performed together during a concert by the Hamburger Ratsmusik at the last Telemann Festival are now being presented here for the first time on CD.

Another important addition to the growing Telemann discography.