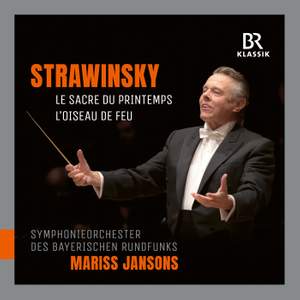 Stravinsky: The Rite of Spring

II. The Augurs of Spring - Dances of the Young Girls [Live]

VII. Adoration of the Earth [Live]

VIII. Dance of the Earth [Live]

XI. Glorification of the Chosen One [Live]

XII. Evocation of the Ancestors [Live]

Ib. The Firebird and Its Dance [Live]

Before the First World War, Igor Stravinsky composed the first three of his great ballet music works for large orchestra, indeed, the most important of his ballets in general: "L'oiseau de feu" (The Firebird) in 1910, "Petrushka" in 1911, and "Le sacre du printemps" (The Rite of Spring) in 1913 especially for the famous ballet ensemble "Les Ballets Russes", one of the most important dance companies of the 20th century, and its impresario Sergei Diaghilev. The first of these ballets ranks as a pioneering work of the early 20th century – and the third, regarded as a key work of 20th-century music due to its extraordinary rhythmic and tonal structures, can both be experienced on this new CD from BR-KLASSIK - in live recordings with the Symphonieorchester des Bayerischen Rundfunks under its chief conductor Mariss Jansons, and in masterly interpretations.