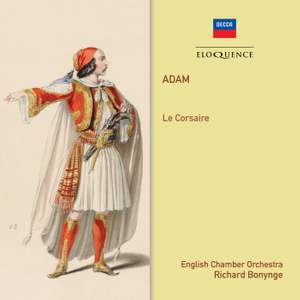 Adams’s complete score, and not the truncated version of harems and pirates that is usually danced. Richard Bonynge and his musicians lavish their love on elegantly crafted music suffused with... — BBC Music Magazine, February 2019, 4 out of 5 stars More…

Overture and opening of Scene 1

No expense was spared to mount the first production of Le Corsaire at the Theatre Imperial de l’Opera in Paris early in 1856. Soon finding a permanent home in the Imperial Ballet of St. Petersburg thanks to the choreography of Marius Petipa, this full-length ballet quickly became an established classic of the genre.

Audiences have thrilled ever since to its story of brigands, very loosely based on Byron and centred around the role of Medora, which was designed originally to display the full talents of the Italian ballerina Carolina Rosati and has remained a favourite role of prima ballerinas down the ages. Underpinning it all is the masterful score of Adam, featuring highlights such as the Pas d’esclave, the Pas de trois des odalisques, and the Le Corsaire pas de deux which was composed by Riccardo Drigo for Petipa’s St. Petersburg version.

For this 1990 Decca recording, Richard Bonynge included a divertissement in Act II, the Pas de fleurs (including the famous Naila Waltz), written by Leo Delibes (who had made his debut as a ballet composer in La Source the year before) for an 1867 revival in Paris. The recording was a labour of love for the conductor, who has done more than anyone on record to revive the sounds of the 19th-century Parisian ballet. ‘It’s often laborious,’ he remarked in 1998 to Opera magazine about his work in preparing revivals of out-of-the-way repertoire, ‘locating the original score, getting the orchestral parts edited and copied, divesting it of later additions - all this before the process of learning and rehearsal begins.’

Bonynge’s work in this case was quickly recognised as an invaluable contribution to our fuller appreciation of Adam’s music, and the recording remains the most complete ever made of Le Corsaire. It makes a distinguished addition to the growing library of Eloquence releases dedicated to the conductor’s work, and a complement to the reissue of Adam’s lesser-known ballet, Le Diable a quatre (4828603).

‘Bonynge draws the diverse threads of the score together with a degree of expertise acquired from a lifetime of involvement with music of this period, enabling the listener to follow the plot without difficulty. He obtains notably superior playing from the English Chamber Orchestra throughout.’ -Gramophone, October 1992

‘We should not look down at poor Adam, whose desire to please an audience is still potent. Bonynge and the English Chamber Orchestra seize every opportunity to strut.’ - Fanfare, November/December 1998

Adams’s complete score, and not the truncated version of harems and pirates that is usually danced. Richard Bonynge and his musicians lavish their love on elegantly crafted music suffused with charm.