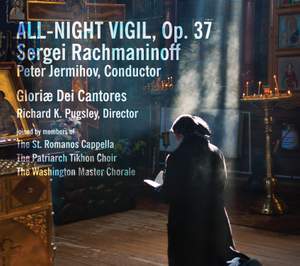 No. 5, Now Lettest Thou Depart

No. 7, The Lesser Doxology

No. 8, Praise the Name of the Lord

No. 10, Having Beheld the Resurrection of Christ

No. 11, My Soul Magnifies the Lord

No. 13, Today Salvation Has Come

No. 14, Thou Didst Rise from the Tomb

No. 15, To Thee, the Victorious Leader

Gloriae Dei Cantores releases All-Night Vigil, Op. 37 by Sergei Rachmaninoff, conducted by Peter Jermihov (internationally recognized specialist in Russian and Orthodox Liturgical music). Rachmaninoff’s All Night Vigil is made up of texts taken from the Russian Orthodox All-night vigil ceremony. Critics praised the work as Rachmaninoff’s finest achievement and “the greatest musical achievement of the Russian Orthodox Church.” It was also one of the composer’s favorite compositions, and the fifth movement was sung at his funeral. Gloriae Dei Cantores is joined by members of the St. Romanos Cappella, The Patriarch Tikhon Choir, and The Washington Master Chorale. Protodeacon under the First Hierarch of the Russian Orthodox Church, Vadim Gan, sings the clergy exclamations as well as Dmitry Ivanchenko. Soloists, Dmitry Ivanchenko and Mariya Berezovska, from the National Opera of Ukraine in Kiev, join the choir of 77 singers for this landmark collaboration and recording.