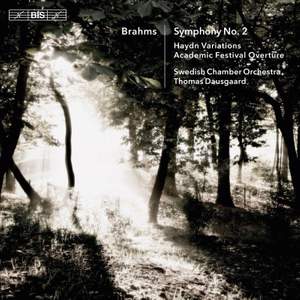 They play with a transparency that makes the inner lines sing but with a burgeoning weight and warmth that is always ready to be unleashed. Dausgaard is as ever a propulsive driving force, and... — BBC Music Magazine, March 2018, 4 out of 5 stars More…

Brahms: Variations on a theme by Haydn for orchestra, Op. 56a 'St Anthony Variations'

On a number of previous recordings, the 40-odd members of the Swedish Chamber Orchestra and Thomas Dausgaard have shed a new light on the Romantic symphonic repertoire, with performances described as ‘tight’, ‘invigorating’, ‘transparent’ and ‘thrilling’. Complete cycles of the symphonies of Schumann and Schubert have appeared alongside individual discs with music by Dvorák, Bruckner and Tchaikovsky, as well as a recording of Johannes Brahms’s First Symphony, released in 2012. The disc was named Recommendation of the Month in the German magazine Fono Forum, while the reviewer in International Record Review described it as ‘an account to make one hope a complete traversal is in the offing’. Five years later that hope is nearing fulfilment, as the team’s recording of Symphony No. 2 is released. Composed during the summer of 1877, which Brahms spent at the idyllic Wörthersee, it is one of his sunniest works, often compared to Beethoven’s Pastoral symphony. It’s followed by the Haydn Variations, in which Brahms was able to combine one of his favourite musical forms – that of theme and variations – with his deep admiration for Joseph Haydn. (Fortunately, the discovery that the theme in question, known as the ‘St Antoni Chorale’, wasn’t by Haydn after all was made long after Brahms’s death.) The programme continues with other favourites in Brahms’s production, including his greatest commercial success in the form of three of the hugely popular set of Hungarian Dances for piano, here in orchestrations by Thomas Dausgaard. The disc ends in similarly high spirits, with the Academic Festival Overture and its rousing and jubilant C major coda.

They play with a transparency that makes the inner lines sing but with a burgeoning weight and warmth that is always ready to be unleashed. Dausgaard is as ever a propulsive driving force, and he subtly brings out the unpredictable elements…The orchestra doesn’t always achieve an ideal crispness, and spirit sometimes wins out over precision, but the sense of exuberant momentum that Dausgaard and his orchestra generate together is always winning.

Dausgaard’s orchestral layout subscribes to the good, old-fashioned method of spatially dividing first and second violin desks while his ear locates salient inner details – especially among violas (crucially) and woodwinds – so that no musical stone remains unturned…Pacey, muscular, thoughtfully expressed and always mindful of where the musical arguments are heading, Dausgaard’s Brahms Second Symphony is a refresher course for those who think they know the work better than they actually do.