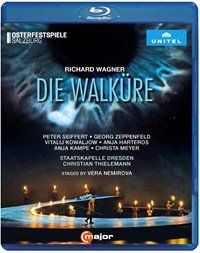 From the 2017 Salzburg Easter Festival

A for effort for the production team – but the real interest of this release is musical. Thielemann’s fourth recording of this opera assembles his strongest cast yet…Harteros is a clearly projected,... — Gramophone Magazine, January 2018 More…

On the occasion of its 50th anniversary, the Salzburg Easter Festival presents a “Re-creation” of Die Walküre: of Herbert von Karajan’s musico-theatrical vision of the 19th century masterwork, with which the legendary Maestro opened the very first Easter Festival in 1967. The top-ranking ensemble of singers performs in the faithfully reconstructed scenery of the original production with impressive video backdrops inspired by the original glass paintings. Christian Thielemann, who has been assistant of Karajan in his beginnings, counts among the world’s foremost Wagner conductors, “… there is an absolute polish to this performance that is exceptional” writes the financial Times about the conductor and orchestra. The critics are full of praise for this “musically ravishing Walküre” (Frankfurter Allgmeine) and its “excellent ensemble of soloists”.

A for effort for the production team – but the real interest of this release is musical. Thielemann’s fourth recording of this opera assembles his strongest cast yet…Harteros is a clearly projected, emotional Sieglinde…Kampe, as always, is bright, forward, intelligent and the centre of attention on stage…The sound of Thielemann’s orchestra, darker-sounding than usual from more Western-based orchestras…is one of the pleasures of the set.

I should mention that the audience reaction at the end of the opera was most enthusiastic, the curtain calls drawing plentiful and vigorous applause and cheers. I always watch to the end, measuring their reaction against my impression. Had I been there, I would’ve cheered too. Camera work, picture clarity and sound reproduction are all very good.

Musically the cast is impressive…Peter Seiffert remains a phenomenon as Siegmund..Anja Harteros is one best members of the cast at maximizing the impact of the text. Georg Zeppenfeld is an implacably forthright Hunding. Anja Kampe's Brunnhilde is never less than solid and secure. Thielemann conducts his superb Dresden orchestra in a steady, at times contained reading of the score, never overemphatic, and light on its feet.