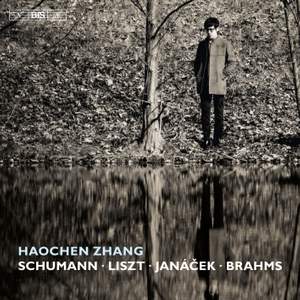 No. 2. Curiose Geschichte (A Strange Story)

No. 6. Wichtige Begebenheit (An Important Event)

No. 9. Ritter vom Steckenpferd (Knight of the Hobby-horse)

In 2009, at the age of 19, Haochen Zhang became one of the youngest musicians ever to win the Van Cliburn International Piano Competition. Since then he has had a busy concert schedule, primarily in his native China and in the U.S.A. but also in Europe where he made his début at the BBC Proms in 2014. Recording has been less of a priority for Zhang, and it is only now that he releases his first studio album, recorded at the Reitstadel, the well-known audiophile venue in Neumarkt in Germany. For this recital, Haochen Zhang has devised a programme made up of works that he feels particularly close to. As he writes in his own liner notes, they ’not only speak to me in a very intimate way, but also connect with one another at a corresponding level of intimacy: as a whole they form a unique musical narrative.’ The pieces all share a reflective and introspective quality, albeit reflective in different ways. Opening the disc Schumann’s Kinderszenen were described by the composer as ‘reflections of an adult for adults’ and in the closing Op. 117 Intermezzi, Brahms also seems to be looking backwards – but with resignation rather than intimate tenderness. Framed by these two, the works by Liszt and Janá?ek contain overtly dramatic episodes, but contemplative interludes form a recurrent feature of the Ballade, and in Presentiment, the first movement of Janá?ek’s Sonata, the dark forebodings seem to rise up from the composer’s own soul.

His aim for lightness, transparency and directness yields poetic results…the rounded edges and polished passagework characterising Zhang’s Janácek are pianistically impressive, yet he glides over the music’s stark aura and speech-like syntax

He captures the childish, quickly dissipating seriousness of Schumann’s Kinderszenen, and plays it with the kind of artistry that sounds sincerely artless. Liszt’s Ballade No 2 has Zhang creating great rumbling waves in the left hand, then closing in an atmosphere of hard-won peace...it certainly rewards close listening