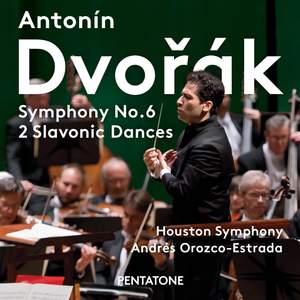 Antonín Dvořák dedicated his Symphony No. 6 in D major to Hans Richter, who was the director of the Vienna Philharmonic and who had asked him to write the symphony. When Dvořák finished the symphony in October 1880, Richter seemed to be very enthusiastic about the work. However, the planned premiere in December 1880 got postponed several times and out of frustration Dvořák had the symphony premiered in Prague by a different orchestra in March 1881. Only to be performed by the conductor it was dedicated to in 1882 in London, where it became a great favorite with the English public.

The symphony combines elements of the symphonic tradition of Brahms, whom Dvořák admired greatly, with influences of Czech folk music. The same Czech folk music which earlier on inspired Dvořák to write the Slavonic Dances op. 46 and op. 72 which brought him as well as Czech music world fame. On this album Dvořák’s Symphony No. 6 is paired with Slavonic Dance op. 72, No. 3 and Slavonic Dance op. 46, No. 8, recorded in September 2015 by the Houston Symphony under the direction of Colombian conductor Andrés Orozco-Estrada, the orchestra’s music director since 2014.