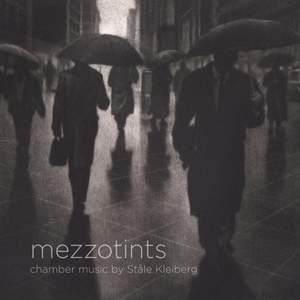 Kleiberg: String Quartet No. 2; I. Adagio

Kleiberg: Sonata for Violin and Cello; I. Andante rubato

Since the early twentieth century there has been a radical renewal of pedigreed chamber genres. We need only think of the late sonatas of Debussy, or of the string quartets of Bartók; or to enter a high modernist space later in the century, of the duos and quartets of Elliott Carter; or to move into a less prescriptive space that some like to label postmodern, of Ståle Kleiberg in our own time. In the solo and chamber works recorded here, Kleiberg recaptures something of the ethos of the private sphere. The solo works have an inward character, occluding display, while the chamber works restore the thematic sharing and instrumental characterization of the classical era, but in both cases of an informal kind, shy of system, wary of rhetoric.