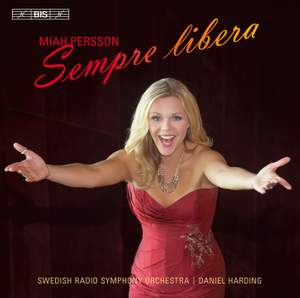 Popular though they are, the choice of items and their sequence in this recital are refreshingly unhackneyed, more than just a hit list of vocal display items...Persson's is, as always, a voice... — Gramophone Magazine, August 2015 More…

On her latest recording for BIS Miah Persson ventures into the fields of bel canto, opéra lyrique and verismo in the company of Daniel Harding and the Swedish Radio Symphony Orchestra. The range of characters is wide, from a teenage Juliet, eager to live life to the full in Gounod’s Je veux vivre, to Verdi’s Violetta, a courtesan at the height of her powers, who in her scene and aria È strano tries to convince herself that her freedom is more valuable than love. The programme includes some of the emotional high points in the opera literature (Bellini’s Oh! quante volte, Puccini’s O mio babbino caro), as well as light relief (Norina’s cavatina So anch’io la virtù magica) and moments of pure, unadulterated beauty, such as the Flower Duet from Lakmé and Offenbach’s Barcarolle. In the two latter pieces, Miah Persson is joined by her Swedish colleague, the mezzo-soprano Katarina Karnéus, while the tenor Andrew Staples makes a cameo appearance in Sempre libera, as Alfredo, singing of his love for Violetta below her window.

Popular though they are, the choice of items and their sequence in this recital are refreshingly unhackneyed, more than just a hit list of vocal display items...Persson's is, as always, a voice that makes you want to follow a musical and dramatic story, one that genuinely talks character and emotion to the listener. She is no brainless automatic canary...Recommended.

The lightness and grace of her instrument is revealed in Norina’s entrata in Don Pasquale, in which her switch from dreamy romanticism in the first section to pragmatism in the second is perfectly realized. Charm, innocence and accuracy mark her Jewel Song, whose accompaniment shares with all the others here the considerable strengths of the Swedish orchestra as well as the positives of Daniel Harding’s scrupulous musicianship.

much of the programme delights: Persson charms with Juliette’s Waltz Song and Dinorah’s Shadow aria, and gives us Giulietta’s solo (Bellini), preceded by its rarely recorded accompanied recit with horn solo. The famous duets — Delibes and Offenbach, with Katarina Karneus — are gorgeous.