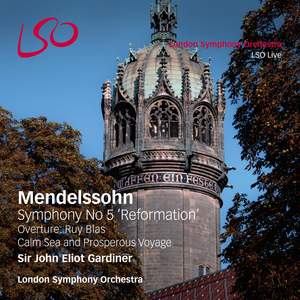 There's much to savour in Gardiner's urgently driven account of Ruy Blas, and the vibrato-less string passage that opens Calm Sea and Prosperous Voyage is simply spellbinding, reminding us of... — BBC Music Magazine, August 2015 More…

Sir John Eliot Gardiner and the London Symphony Orchestra join forces once again in the latest instalment of their exploration of Mendelssohn’s symphonies.

The previous release, Mendelssohn’s Symphony No 3, ‘Scottish’, coupled with The Hebrides Overture and Schumann’s Piano Concerto, has received widespread critical acclaim. Gramophone awarded the album Editor’s Choice and called it "a truly memorable performance"; IRR observed that "it is so good that it can be recommended without hesitation" and it received an ICMA 2014 nomination in the Best Collection category.

Mendelssohn’s Symphony No 5 was written in 1830 to commemorate the 300th anniversary of the Augsberg confession – a seminal event in the Protestant Reformation. Allusions to the symphony’s title and inspiration can be heard throughout the music itself: the Dresden Amen is cited by the strings in the first movement whilst the finale is based on Martin Luther’s well-known chorale 'Ein feste Burg ist unser Gott' (A Mighty Fortress is Our God).

Coupled with this are two of Mendelssohn’s overtures, both of which were inspired by literary works. 'Calm Sea and Prosperous Voyage', based on two short poems by Goethe, depicts the journey of sailors at sea with a still adagio opening ultimately giving way to a triumphant homecoming. Completing the album, the overture 'Ruy Blas' was commissioned by the Leipzig Theatre as an overture to Victor Hugo’s tragic drama of the same name.

There's much to savour in Gardiner's urgently driven account of Ruy Blas, and the vibrato-less string passage that opens Calm Sea and Prosperous Voyage is simply spellbinding, reminding us of the wizardry and phenomenal aural imagination that is ever present in Mendelssohn's orchestration.

Like all of Gardiner’s live cycles of the Mendelssohn symphonies at the Barbican, this one comes across with pace, clarity and flaming-eyed conviction

Ruy Blas is something out of the ordinary, and not only because of its sleek lines and uncommonly fast tempi but in one or two textural anomalies...Calm Sea...subscribes to a similar interpretative formula, clean, drivn and transparent...I'm fairly convinced that Gardiner's way [with the Reformation] was also Mendelssohn's way. It's a powerful reading, solidly argued, often exciting and vividly played throughout.

it showcases Gardiner’s forensic method of working and his very good relationship with the LSO...The two overtures are extremely successful...The blaze of the final peroration [in the Reformation symphony] is thrilling, and Gardiner manages to give the impression that it shouldn’t really sound any other way.

This is something close to the ideal Gardiner experience: stringent while full of expressive detail, close-focus while still drawing the bigger picture...[The Reformation] has no room for stolid sermonising as it practically races to the chorale finale, with some remarkable finesse in the dynamics along the way.

The London Symphony performances, crisp and driving, are attractive and satisfying.

absolutely startling…Gardiner has taken a completely fresh and forensic look at the music, and has virtually reinvented the symphony. It blazes anew: it's as simple and complex, as direct and sophisticated, as that...The LSO, here, is the best period band in the world.